Home » Tournament Facts » Who We Are » Youth Programs

With the help of more than 500 local volunteers, the Ojai Valley Tennis Club (OVTC), organizes and hosts the annual Ojai Tennis Tournament.  Another key objective of the club is to promote interest in physical fitness and tennis among Ojai and Ventura area youth year-round.

The OVTC Youth Tennis Committee conducts and supports programs to introduce the game of tennis to Ojai Valley youth and to encourage their continued participation in the sport.

Dozens of local tennis enthusiasts support the youth programs by volunteering as coaches and mentors, as well as business sponsors. Some of the youth program sponsors include Wilson Sporting Goods and the USTA/SCTA Organization, both of whom donate tennis equipment; Toppers Pizza and Friends Ranches provide delicious and healthy citrus snacks and lunches at fundraising events; and the OVTC each donate direct funds.

This year, OVTC donated funds to the Ojai Recreation Department (ORD) Youth Tennis Programs for youth tennis scholarships, prizes and tennis equipment, all of which fosters friendly competition on the Libbey Park courts. Tennis Professional, Katya Welborn, has more than 80 participating Junior players (ages 4-18 yrs), took the helm of the ORD youth tennis program in 2021. Welborn is also in charge of training the Ojai Ball kids for the annual tournament.

The 10th Annual Vos Holiday Tennis Challenge, a well anticipated year end tradition, is a tournament in which 64 players (32 teams of adult/youth paired teams) participated in both “In for Fun” and “In To Win” Divisions to raise funds for area youth programs. The annual Vos Challenge guarantees a weekend of family fun to wind down the old and ring in the new year.

The OVTC also organizes a “High Performance Clinic” in late March where local tennis professionals share their expertise with a select group of promising young tennis players for a day. Juniors are “sponsored” by coaches to participate and rotate through 6 or 8 courts, receiving instruction for a different skill on each court.

During The Ojai, the OVTC presents Sportsmanship awards to deserving youth who are nominated by local tennis coaches and selected by the Youth Tennis committee. The selection is based on sportsmanship, motivation, talent, potential to advance, and financial need.

The prizes are tennis related, including tennis scholarships for summer camps and individual and group lessons, donated by various Ojai Valley tennis professionals.

Several past Youth Award winners will be playing in this year’s Ojai Tournament and have gone on to compete at the college level. In addition, OVTC supports the Ventura County Junior Tennis Association tournaments and provides VCTA Youth Team Tennis programs with trophies, balls and prizes.

One of OVTC’s most successful and wide spread youth tennis programs is the “10 and Under” program (formerly QuickStart), that is brought to Ojai Valley Elementary schools and some Ventura schools through a collaboration between OVTC, ORD, Ojai Unified and Ventura Unified School Districts.

Developed by the USTA, 10 and Under tennis is specifically designed to speed up the learning curve for younger children, with the use of smaller, lighter racquets, under-inflated balls and smaller courts. The instruction results in quicker progress and more fun, because the kids can start to rally and play sooner. The program is now in its ninth year, under the outstanding leadership of tennis professional, Philippe Gache. With the help of several dedicated adult volunteers and Gache’s leadership, the 10 and Under tennis program has grown from two to more than eight elementary schools in the Ojai Valley and Ventura, and works with an average of 2000 students between 3rd and 6th grades during the school year.

Gache said that Ojai schools such as Topa Topa Elementary, Mira Monte Elementary, Ojai Valley School, Oak Grove School, Montessori School of Ojai and Sunset Elementary are great examples of schools where the principals, teachers and parents are very involved in the success of the program. 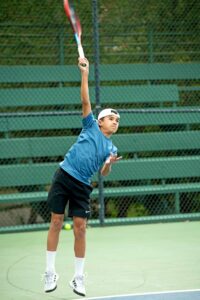 According to Program Director Gache, the youth tennis program in the Ventura Unified School District (VUSD) has been very well received, particularly in the Title One schools.

“Most of these kids have never had a racquet in their hands and tennis brings them a new physical activity in a satisfying and fun way,” Gache said.

During the playing of The Ojai, a 10 and Under Tennis Challenge will once again take place in which promising and interested students can challenge each other for prizes and school pride. The Challenge will be held at the Lower Libbey Park courts on Sunday, April 26th, during the tournament at 10:30 a.m.

“The OVTC would like to thank Wilson Sporting Goods, and several local businesses and all of our volunteers and all of Ojai Valley’s Tennis professionals for their generous contributions and sponsorships and unwavering support of all Youth Tennis activities,” said Craig Fugle, the OVTC Chair of Youth Tennis Programs. Fugle added that for years Michael Taggart was an ardent financial supporter of Ojai Youth Tennis Programs before his passing in September of 2019.

To volunteer or to donate to the OVTC Youth Tennis efforts, please contact Fugle at OjaiFugle@gmail.com. Tax Deductible Donations may be sent to:  P.O. Box 482, Ojai, CA 93024

The following tennis teaching pros donate their time to area youth by giving free or discounted tennis lessons to the Ojai and surrounding Ventura and Oxnard communities. The Ojai Valley Tennis Club wishes to thank them for their generous support of OVTC Youth Programs.